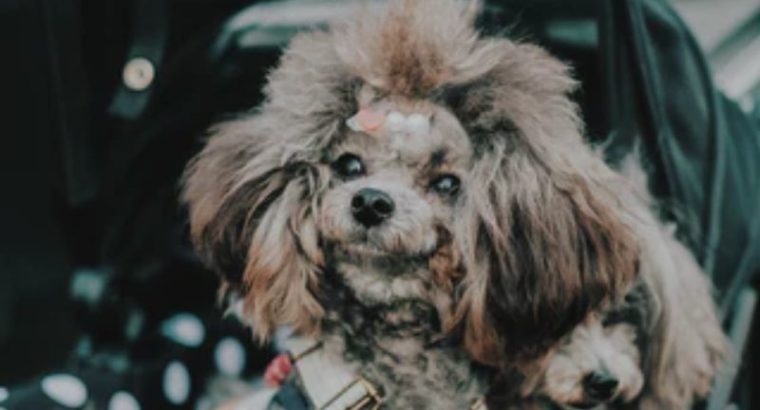 What is a Merle Poodle

When we speak about Merle Poodle, it’s a type of Poodle that has a patterned coat and patches. They have a solid base with a unique pattern on top. Think about what you can see from a leopard’s coat.

You may have already known that Poodles come in different sizes. There are Standard, Miniature, and Toy breeds, and you can find Merle Poodles in all varieties.

What is a Merle Pattern?

Over the years, we’ve seen many people looking specifically for Merle Poodles because of their unique looks. Yet again, it’s still rare. Take note, though, that the merle pattern is not isolated to Poodles alone. You can find the pattern in other breeds that the American Kennel Club recognizes. To date, they recognize the following:

Merle is a dilution gene. This means that it lightens the coat color and is not spread evenly. It leaves patches of undiluted color all over the dog’s body.

Remember that dog genes significantly affect their color and coat pattern. But today, little is known about merle patterns, and experts still think if it is different from the piebald gene. A piebald gene is common in dogs. These dogs are spotted or multicolored, wherein their bodies are almost entirely white (or another solid color), with patches and spotting on the neck and head.

With other breeds, it is normal to have this type of pattern. For Poodles, there’s still an ongoing debate if this is a natural occurrence for the breed.

Before we go in-depth, let’s have a rundown of what a Merle Poodle is. That way, you can already decide if this is the right breed for you.

The physical appearance of a Merle Poodle is almost similar to a regular breed, except for the color. At times, Merle Poodles can have blue eyes or partly blue eyes. In addition, their paw pads and nose may be pink and black. Some Merle Poodles have a coarse coat, while others have an incredibly soft co

They have this square-shaped body outline with long faces. Merle Poodles have a long neck and dropping ears. Generally, they look regal, and that’s why many people see the breed as snobbish.

Merle Poodles are also good for people with allergies. While it’s not 100% hypoallergenic (because no breed is), they are highly tolerable for people with such conditions.

What is the Blue Merle Poodle?

This type of Merle Poodle is a black poodle with white and gray patterns. This gives the illusion that their coat is bluish. At times, people call this breed a Grey Merle.

Generally, Merle Poodles are known to be affectionate, docile, and calm. Plus, they love being around humans. But there are some observations wherein the temperament depends on the color. For example, black Poodles are aloof, and cream and apricots are calmer. This is not 100% certain and just mere observations by pet owners.

Merle Poodles can adapt well in most spaces. So whether you live in a cramped apartment or in a mansion, it should never be a problem. However, it’s best not to leave them alone for a long time because they are sensitive, which could also trigger their anxiety.

As expected, Merle Poodle has outstanding intelligence. According to studies, Poodles are known to be among the topmost intelligent dog breeds around the world. But this could also mean that they could unintentionally place themselves in sticky situations. Having said this, you need to keep an eye on your pet and make sure that they are safe all the time.

As we’ve mentioned, Merle Poodles come in all variants – the Standard, Miniature, and Toy.

There’s no need to worry about training your Merle Poodle because they could learn quickly – thanks to their innate intelligence. Most Poodles, including Merle Poodle, can learn new commands in five repetitions or less. Plus, they naturally want to please their owners, and that’s one of their motivations to learn new tricks.

As a pet owner, you must use positive reinforcement when training your dog. But be careful because they can easily pick both the good and bad habits.

Take note that Merle Poodles easily get bored, and that’s why you have to keep your training sessions active and short.

Are They a Good Guard Dog?

Some people enjoy having a companion dog. But some look for dogs to guard them.

Merle Poodles are highly alert and will bark when necessary. But they often lack aggression, making them less ideal if you are specifically looking for guard dogs.

Fortunately, this breed does not fade, and they could keep their color for life. Of course, it’s natural to see gray hairs as they grow older. But for the most part of their lives, their color will remain the same.

When we talk about a Parti Poodle, you will notice two colors on its coat. They are usually in black and white, brown and white, or red and white. The color white is often the base, and the other colors are the spots.

On the other hand, a Merle Poodle has a pattern of colors and dilution on the coat.

Generally, Merle Poodles are healthy. But as always, it can still get sick and may encounter a few health issues. The common reasons could be due to genetics or poor living conditions. This section will give you a glimpse of the usual diseases and health conditions your Merle Poodle may encounter.

This is often referred to as bloat. It is where their stomach is filled up with food, gas, or fluid. If this happens, there could be a sharp drop in your Merle Poodle’s blood pressure. The main reason for this is too much eating. In other cases, your Poodle is drinking or eating too fast. Also, bloat can happen if you engage your dog in vigorous exercise before and after eating.

This is medically known as Hypoadrenocorticism, where there is a lack of production of the adrenal hormone. It can directly affect your Merle Poodle’s body and could eventually lead to heart problems.

Cushing’s disease is a condition wherein your dog produces too much cortisol hormone caused by an adrenal gland or pituitary gland tumor. In other cases, prolonged usage of steroids could lead to this disease. If you don’t take care of it, this can drastically affect your dog’s quality of life.

Taking Care of Your Merle Poodles

If you want your pet to live happily, it’s a must that you know how to take care of them properly. Here are a few tips you must consider.

Your Merle Poodle needs a well-balanced diet rich in animal protein, carbohydrates, healthy fats, vitamins, and minerals. Get quality dog food instead of the cheaper ones readily available in the supermarket. You can also prepare homemade meals. But make sure to use supplements to ensure optimal health.

We recommend that you spread their meals to two to three times per day. As for their water, you can use dental water additives for their oral health.

This breed is energetic, which means you need to spend time exercising them. Experts suggest that you give your pet at least 60 minutes of playtime every day. You can take them for a brisk walk in the morning and do the same in the afternoon.

If you must know, Poodles were bred as hunters. Because of this, they enjoy games such as retrieving objects. This is an excellent exercise for the body and the brain. Also, you can take them for a swim as they excel at it too.

Many people are wondering if Merle Poodles are purebred. For others, they think that irresponsible breeders introduced the merle gene to the Poodle gene, which makes it a bad thing.

There are also claims that breeders who intentionally breed this type of Poodle are doing it for one reason alone – and that’s for profit.

Take note that breeding this type of Poodle can go terribly wrong if not done by an expert. The breeding of Merle Poodle is considered successful only if it inherits a single merle gene from the parents. Let’s emphasize the term single, as it plays a crucial role in the entire process.

If the breeding goes wrong and they inherited a double merle gene, there could be serious consequences. Your puppy might get blind or deaf, and they could suffer from several health issues. As you can already see from here, breeding Merle Poodles is complex, which is why it is rare and often costly.

To date, studies are showing that it is possible to pair two Merle Poodles as long as the breeders understand the different levels of the merle gene. However, there is no solid reference or knowledge about this. Thus, several breeders do not encourage this practice.

Others think that the merle gene has been with Poodles ever since. And the main reason why it’s rare is that breeders in the past favor breeding Poodles with solid colors. For them, Cryptic Merle Poodles may have hidden the gene.

A Cryptic Merle Poodle has a merle gene, but it doesn’t look like one. They are also known as the Phantom Merle Poodle.

Cost of the Merle Poodle

If you wish to get a Merle Poodle, prepare to shell out $2000 – $5000. Regular Poodles are already expensive, and getting this type of dog should be heavier on the pocket. In fact, you can see breeders selling Merle Poodles for $22,000. This is not surprising, considering its unique looks.

In general, it isn’t bad to own a Merle Poodle. With its interesting appearance, we bet it could turn heads. Yet again, there are still a lot of controversies surrounding this breed. So use your moral compass if you wish to get one. As always, get from reputable breeders and never from puppy mills. You shouldn’t support the latter as they breed dogs under the worst living conditions.

For the grooming needs, it does not need special treatment, and you can take care of it like a normal Poodle. At the end of the day, what’s essential is you exhaust efforts to give what’s best for your Poodle – Merle or not. And it’s not just about giving them toys and high-quality food. You must also spend time with them.